That night out with Mr. Grant and Ethan I was on my best behavior and so was Ethan, something about the twinge of pain each of us felt when we sat down, the few times we sat down.  After we dropped Ethan off back at his apartment we went home.  I was quick to strip down and get into bed.  My back against the headboard, covers over my lap, I waited patiently as Mr. Grant moved about the house, checked the windows, and turned off all the lights.  I had just closed my eyes when I felt him nudge me awake as he sat on the bed.  I opened my eyelids ready to tell him to get into bed when I saw two wrapped presents in his hands.  One looked like a book.  The other was oblong and not very big.

“Open it,” he said offering me the box.

I took the book in hand, tore the paper from it.  I didn’t want to seem greedy, plus I thought it might give me a clue.  I was surprised to see it was about writing screenplays.  I looked at him a little confused.  He smiled back.  I tore into the second present with a little more enthusiasm.  I was surprised to see it was a digital video camera.  I knew at once that it was pretty expensive.  I blushed.

I leaned up in the bed, kissed him on the cheek, then sat back against the pillows as I ran my hand over the smooth box.  I wanted to open it right then, get it to work, and start recording something but I thought about the time.  I regretted for a moment that we had gone out, that he hadn’t given it to me earlier, but I also felt a tremendous amount of happiness and that I owed him a debt.  He had done something significant for me.

“Maybe we can do something to calm you down.”

He placed his hand on my forearm, leaned in for a kiss.  I let him slip his tongue between my lips.  His tongue slithered against mine for a long time as I reached down under the covers to my hardening dick that was trapped in my briefs.  I was ready for it to happen right then but he pulled away.

“Have you brushed your teeth yet?” he asked.

I clenched my teeth together as I smiled my best cute and guilty smile.  He shook his head, then motioned for me to go into the bathroom.  I got up from the bed.  He followed me.  My hard dick was a hindrance as I rinsed off my toothbrush and put some paste on it.  He moved behind me, wrapped his arms around my sides, kissed at my neck.  I looked at him in the mirror as I stuck the brush in my mouth.  He took his own brush, rinsed it off, and put some paste on it without moving from behind me.

We brushed and smiled at each other for a long time until we were both done brushing our teeth.  I rinsed out my mouth.  He did the same.  That’s when he moved us to the shower stall and he stripped out of his clothes as I adjusted the water temperature and pressure.

Despite seeing him naked so many times I loved to watch him undress.  I loved the way his dick bounced and swung as he stepped out of his boxers, the way it settled over his testicles.  I got inside first and he stepped in behind me.  We waited until the water covered nearly every part of our bodies before we started to wash each other.  Our hands ran over each other.  We touched every mound, length of skin, and every crevice until we felt brand new and that all of the grime had been washed away.  I was ready for anything as he pulled me from the shower and we dried ourselves off.  I wanted to drop to my knees right there but he stopped me, then dragged me to the bed.  He pulled me onto his chest as he sat, then fell backwards.

Our dicks pressed together I grabbed hold of the sheet on either side of him as I struggled to stay atop him properly to keep kissing.  He broke off the kiss and let out a little laugh as his hands went to my arm pits.  He rolled me over onto my back.  His larger body pressed down on me for a moment before he moved us up the bed so that our entire bodies were on it easily.  He reached down to my ass, brushed over the sensitive, bruised skin as he made his way to my hole.  I felt him stick the first digit of his finger inside.  It felt like he had unlocked me.

A person doesn’t normally realize how much tension is there, how much stress is relieved by just a simple penetration.  It wasn’t the first time I felt that relief, but being with him was the first time I truly felt I was safe.  He kissed at my neck, worked his way down between my pecs, over my abs, through my pubic hair, but stopped just before my dick.  I opened my eyes to look down just as I felt his tongue touch me there.  I watched as he ran his tongue back up my body, all the way to my chin.  I rolled my head back.  He continued to kiss at my neck.

I slid my feet to my butt sticking my knees in the air.  I opened myself to him and I felt his fingers grope at my thighs, the crevice between my legs, the bottom of my cheeks.  He teased me with his finger tips as I felt his teeth sink into my skin.  He sucked at my flesh.  I knew he was giving me a hickey and I thought to stop him before the pain became pleasure.  His hands at the backs of my knees, his hard dick rubbed at my ass, slimed my hole as he moved to a second spot on my neck.

Another flash of pain, then the surrender to pleasure as he sucked at me until he was sure he had left a mark.  His wet lips and tongue moved down to my chest, first the right nipple.  His dick still teasing at my puckered hole.  He worked my nipple into a hard point, then moved to the other.  I thought for a moment he was done with the first one until I felt his fingers there, clumsy at first, then I felt his thumb and forefinger take hold.  He twisted and pulled until I let out a moan, then he stopped and his hands left my body.

He pushed himself up, his hard dick poked up along mine.  I reached down and took hold of his and mine in one hand, pressed them together so I could really compare them.  He took hold of both my nipples, twisted them until he got another moan from me.  I looked up to him.  His sweaty, muscled form was clear to me in the bedroom light.  I loved the look of his muscles on his chest, his neck, his arms.  He had a five o’clock shadow.  His hair was slightly messy.

There was a familiar pop of a lid, a bottle of lubricant.  He squirted it on his hands, on his dick, into the crack of my ass.  He worked his dick with one hand as the fingers of his other hand pushed inside of me.  I reached up for him, barely touched his skin when he took hold of my wrists, pushed them up next to my head where he pinned them.  He had only opened me a little.  I knew the lube would help.  But I was still anxious as he pressed into me.

The head of his dick felt bigger than previous times as I tried to relax, push out, and let him inside.  He pressed slowly, wider and wider, impossibly long, until I felt him.  His slick hands still on my wrists he lowered his head to my neck.  I could smell the sweat of his body and the shampoo we both used.  He pulled out slowly, pushed back inside of me.  He was in two places at once.  I was in two places at once.  He worked in short motions until he could take longer strokes, faster and harder.  My own dick was still hard as if it was wired to my prostate.

When he tickled me inside the pulses ran through my dick and it felt like I could give off an electric shock to anyone who touched it.  It was the center of all sensation.  The feeling traveled to my toes and I curled them instinctively, balled my fists too.  I could feel the cool air on my chest, my nipples.  There was the musky smell of his arm pits.  His hairy thighs pressed against mine.  He was moving the bed as he rocked into me.  I heard the steady knock of the head board against the wall and I had to laugh.

He laughed into my chest as he continued the motion.  His testicles slapped at me with the same rhythm.  I could hear the squish of our flesh.

“Do you like it?  Do you want to see if we can knock down the wall?”

He let go of my wrists to get better leverage so I reached for his body, dug my fingers into his back where I felt sweat, muscle, the shape of bone.

“I want you to wake the neighbors,” I said.

He got faster and harder as my hole had loosened.  He pounded at me.  We kissed and he went deep as if he had pushed all of the way through my body.  I orgasmed right then, ejaculate shot up to my face, my chin, and my neck.  He took a few more thrusts and then just as he had his orgasm deep inside of me I ran my fingers down his back unsure just how deep I had cut him, if at all.

“You were fantastic,” I replied.

He lay his head against me as I felt him deflate inside of me until he slipped out as he sat between my knees.  I took hold of his hands, moved them to my chest just wanting to keep that bond between us.  He tickled me a little before he moved to lay beside me.  I rolled onto my side and we kissed a little until we recovered.

When we did it strangely became clinical as we stripped off the sheets.  I went to the bathroom as he carried them to the laundry room.  Moments later he joined me in the shower.  He touched the spots on my neck.  I looked over his back.  We laughed at what we had done to each other, laughed at the site of us in the mirror when we dried off.  We were exhausted.  Our limp dicks were defeated in the best way.  We barely got new sheets on the bed before we fell asleep in each other’s arms.
Posted by Bryan James at 3:48 PM 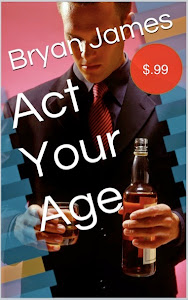 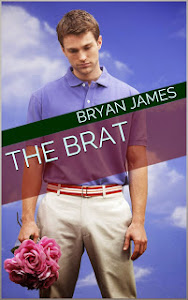 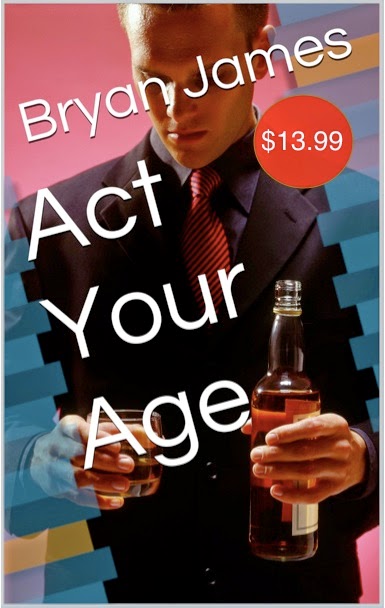 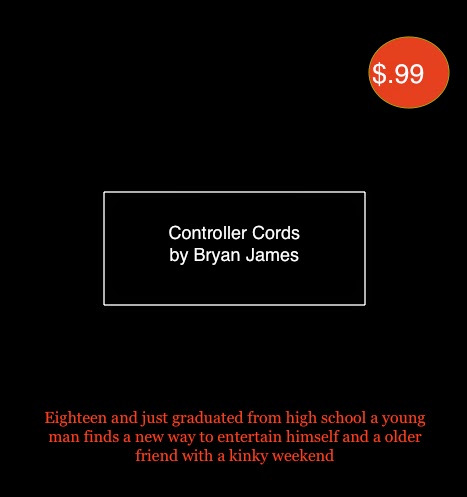 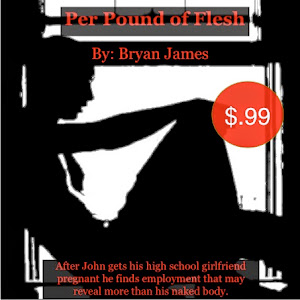 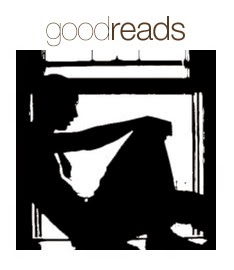